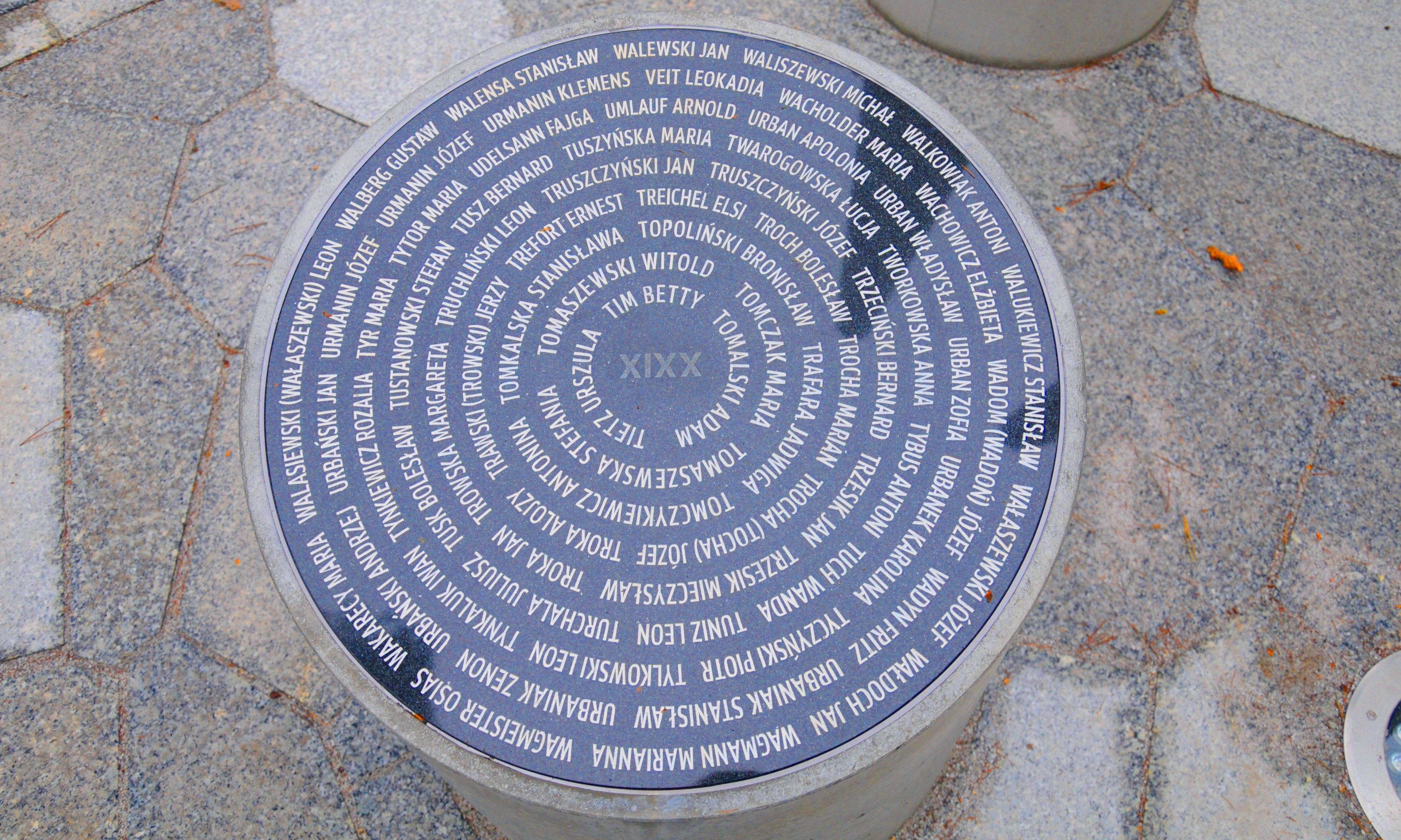 The Szpęgawski Forest was chosen as the murder site for several reasons. It was a huge and uninhabited complex with an area of over 7,000 ha. In 1939, at the place of execution, there was a sandy area which belonged to the German landowner Joachim von Paleske. The area was easily accessible from the nearby cities of Starogard, Gniew, Pelplin and Tczew. The place of execution was surrounded by trees growing densely The Germans guarded access to it so that the murders would never come to light.

The extermination of Poles on the area of the pre-war Pomorskie in 1939 was the first planned act of genocide during the Second World War. The campaign was led by Albert Forster, governor of the Reichsgau Danzig-West Prussia. People were murdered in approximately 400 locations, including the Szpęgawski Forest, the Piaśnica Forests and forests around Mniszek and Grupa. The Germans focused on eliminating representatives of local elites, Jews and mentally disabled people. Proprietary lists were probably prepared not long before the war or shortly after it started. The people mentioned there were called „antisocial elements”. It is estimated that approximately 40,000 people were murdered by Germans in Pomerelia.

Organizers of the murders

The Third Reich and its subordinate Wehrmacht, Gestapo, SS, SA, EK 16, Landesgandarmerie were responsible for the crime. The Kommandos responsible for the murders were led by SS officers, who were part of, among others, the Einsatzkommando 16 (special operational group of security police) and the Selbschutz (paramilitary organizations created by the German state on the conquered areas, bringing together representatives of the German minority). At the forefront of the Starogard forces of „German self-defense” stood Paul Drews. The district structures were managed by Johann von Plehn. Among the active members were Gerhard Wichert and Egon Sievert. In many post-war testimonies, they were depicted as degenerates.

The beginning of the Szpęgawsk terror

During the night from 12 to 13 September 1939, trucks with armed SS men and members of the Selbstschutz rode up Gdańska street in Starogard. 12 young men were taken from the barracks. Among those arrested was the 19-year-old scout Józef Grzybek. The raid was a retaliation for alleged anti-German activities. They were taken to the forest near Kokoszkowy, then shot and left unburied. The news quickly reached the city, causing an atmosphere of fear and uncertainty.

Before the execution, the arrested were beaten and tortured in prisons. Then, they were transported by truck to the Szpęgawski Forest. Set over the pit or lying in the grave, they were murdered with a shot in the back of the head. Also, machine guns and rifle butts were used to kill.

Crime in the psychiatric hospital in Kocborowo

On September 04, 1939, SS-Wachsturmbann „Eimann” unit arrived at the hospital under the command of SS-Obersturmführer Karl Braunschweig, responsible for the Aktion T4 – a program of the Third Reich of Germany assuming the murder of „the life of unworthy life”, namely the disabled and patients staying in hospitals. The first patient, Augustyn Krzyża, was murdered on September 10, 1939. It was forbidden to take the body away and it was lying on the floor for a few days. According to the Germans, the mentally disabled people were a „worthless ballast for society”. From September 22, 1939 to January 21, 1940, patients were taken to Szpęgawsk on a daily basis. In total, 1689 patients were shot, including 75 citizens of other countries. From February 1940, as part of the Aktion T-4, patients were taken to extermination camps or killed with luminal injections.

Jews murdered in the Szpęgawski Forest

Thoughout September and October 1939, the Germans took to murdering Jews from Kociewie. In the pre-war Pomorskie they constituted only 2 percent of the population. Before the war, about 143 of them lived in Starogard. Many, with the advent of the September fights, left Kociewie. Most probably, on October 19, 1939, the occupation authorities called the remaining Jews to the magistrate under the pretense of discussing issues related to anti-aircraft defense. Those arrived were taken to the nearby synagogue, brutally beaten and then they were probably deported to the Szpęgawski Forest where murders were carried out. There is also another version of the crime according to which the Jews were shot in the synagogue and then their bodies were taken to Szpęgawsk.

Losses in the clergy

A terrible fate was met by the Polish clergy from the Starogard and Tczew districts. The Chełmno diocese lost about half its priests. They were transported to prisons and subjected to torture. The clergy had a special influence on shaping the national identity of Poles, which is why they were treated with particular cruelty. One of the arrested was father Reginald Krzyżanowski from Sumin. Members of the Selbstschutz knocked his teeth out, poured vodka violently into his mouth, ordered him to strip naked and walk on his knees. Father Józef Kuchenbecker from Bobowo had a swastika cut by the executioners with a knife on his forehead.

In October 1939, the arrest of teachers began. They were imprisoned in a former enterprise called Wytwórnia in Skórcz and in the Starogard prison. According to Alfons Kuling’s testimonies, teachers were imprisoned in overcrowded, unheated cells, in terrible sanitary conditions, they were beaten, humiliated and starved. The largest execution took place on October 20, 1939. 43 teachers were shot then. During the war, more than 200 pedagogues died in Kociewie, whereas approximately 100 of them were shot in the Szpęgawski Forest.

Conditions in prisons and detention camps

Before the executions, the victims were imprisoned in the Gniew castle, Tczew barracks, the former Skórcz enterprise called Wytwórnia, the Starogard prison and tower or the Pelplin Seminary. The prisoners were tortured and forced to physical work, they were physically and mentally harrassed. As the former prisoner Walerian Blank testified after the war: „I was arrested on November 01, 1939. […] until November 11, 1939. At that time, I had the opportunity to see people being beaten and murdered by the Gestapo. Their system was to shoot and hang people on their own scarves, and women were raped before that. […] During the night [the prisoners] were taken for burials”.

The balance of the crime

The Szpęgawski Forest was the execution site for the population from the districts of Starogard, Gniew, Tczew, Świecie and partly Kościerzyna and Bytów. Hundreds of people from other parts of the country also died. The final number of victims or their personal details have not been established until this day. At the end of 1944, the Germans, obliterating the crime, burned most of the corpses. In the Szpęgawski Forest, as many as 7,000 people could have died, approximately 2400 names were established. In the cemetery there are 32 mass graves in one complex and 7 graves 500-1000 m away.

On April 24, 1954, a monument in honor of the murdered was unveiled. Every year, on the third Sunday of September, anniversary celebrations take place there. Families of the murdered, delegations of local governments, institutions and schools as well as inhabitants of Pomerelia take part in them. On the 80th anniversary of the crimes committed here, a monument in honor of the murdered was unveiled. The composition of the monument refers to the forest theme, in which interrupted life is symbolized by felled tree trunks. Approximately 2,400 names of the victims of the crime were written on the trunks. One trunk is dedicated to the unknown victims. May the memory of the Szpęgawski Forest last forever!